Saying goodbye is not as hard as having a bottoms up of hard liquor.

It was a fun fun fun Friday, UKV’s and ICV’s went to Manila for a day, and for UKV’s to renew their visa in the country, whereas, us, the ICV’s spent the day running our own personal errands.

A good friend of mine and I were asked to do some tour in old Manila together with our co-volunteers. It was a bit pressured, stressed and out-of-the-box thing again for us (me to be specific, because I need to talk pretty much how versed I am in the place), but don’t get me wrong, I used to live in the old Manila before that’s why I am pretty much well versed in the area. All the familiar faces, the places rushing back into my memory as if I’ve been here for couple of months ago and not years. 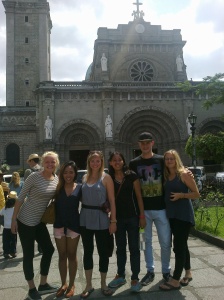 Churches here and there

One of the highlights of old Manila (Intramuros) is its highly influential yet, preserved churches built during the Spanish era(the country has been a colony of Spain for 333 years, from 1921 till ___ spanish-american war 🙂 ). These churches has been a witness of how influential the Spanish culture was in the country till now,(I can still imagine the population of students who would grab for Spanish as Foreign Language in uni.). We went to Manila Cathedral and San Agustin Church (which is known for one of the oldest existing church in the country).

HHC and I saw this good restaurant with in the old Manila(Barbara’s to be exact), and I told her, that it has a nice scenery(pretty much a romantic one) while having a nice cup of coffee, will make your day(I enjoyed staying at barbara’s before when I was in uni for coffee).

The not so usual walk around the historic walls

Walked through the walls of the historic landmark, made me realized that I’ve been in these places before, as if I am part of the  history! Living up the “International Relations”  mentality does not make any difference, it is a matter of again- going out – of – the- box!